History of automation: from self-moving chariots to business applications 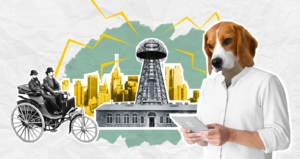 In 1898, Nikola Tesla held a demonstration of his remote-controlled mobile mechanisms in New York’s Madison Square Garden. It was probably the first time people questioned whether robots could replace humans and threaten their livelihoods. Today, with over a century of a mind-blowing history of automation behind us, the question still persists.

The COVID-19 pandemic has accelerated the adoption of automation technology across multiple areas of human life, including business. Today, teams and companies of all sizes — from small and medium-sized businesses to large enterprises — are striving to achieve business automation success to ensure resilience and business continuity.

We have bots in charge of customer service. We keep AI-driven devices in our back pockets and use actual robots to clean our increasingly ‘smart’ homes. Whether it’s a fully-automated advanced robotic process automation app or a dishwashing machine, each of these things use automated algorithms in one way or another. Algorithms and AI even tell us what to wear and watch.

But how did it happen? Are we still in control of our lives? What is our place in this automated world? And what are the lessons we still have to learn to get the most out of automation for our businesses and everyday lives? Let’s try and find the answers to these and other questions in this article.

When did the history of automation start?

We believe it would be fair to say that the history of automation is just as old as the history of mankind. The very idea of having a mechanism that would operate in a predetermined way and perform specific actions, while you’re sipping on a cocktail is probably as old as the world itself. In fact, it was Homer, the poet, not the cartoon character, who first used the term ‘automation’ back in ancient Greece, talking about a self-moving chariot.

It’s quite clear, however, that without proper engineering skills and knowledge, people weren’t capable of designing more sophisticated automation tools. And so, the real history of automation as we understand it today starts much closer than Homer. After all, both the Greeks and the Romans used their inventions for entertainment rather than improving their daily tasks.

The Industrial Revolution and the appearance of the first computer

It wasn’t until the industrial revolution of the early 19th century that automation finally started making a significant impact on people’s lives. The earliest examples of automation as we understand it today coincide with the implementation of industrial machinery somewhere around the early 1980s.

One of the most notable breakthroughs was Joseph Jacquard’s invention of the so-called ‘punch cards’ in 1801. These cards were used to tell mechanical looms what pattern to make. Using this technology, Charles Babbage began developing the concept of the first-ever programmable computer, which he later called The Analytical Engine. Babbage’s friend Ada Lovelace, in the meantime, created the first-ever computer program, which would have run on his machine.

The history of automation is not all success, however. A 1966 negative report about Natural Language Processing (a subsection of artificial intelligence) caused the so-called ‘AI winter‘ and delayed further development of automation and AI techniques for over three decades.

Lastly, another big step forward took place in the 1990s. An artificial intelligence called ‘Deep Blue’ defeated Garry Kasparov at chess in 1997. NASA launched its first autonomous robotics system on the surface of Mars. While at the same time, web crawlers and other AI-based data extraction programs became a crucial part of widespread internet use. The 1990s also marks the time when the history of automation thoroughly intertwined with business process management.

In the early 2000s, automation development went quiet again for a while until the release of Apple’s Siri. Siri de-facto triggered a new age of AI-driven assistants. It also finally shifted the whole movement away from physical robots toward the development of robotic process automation and AI software.

What are automation’s current challenges?

If you think about it, we live in an exciting time. We have blockchain technologies, cyber surgeries and automated detection of fake data on social networks.

In the video below, we cover the pros and cons of business porcess automation, as well as the common myths and valuable tips about it:

For the first time in history, automation is actually available to everyone, allowing organizations to focus on what’s really important: customers, career and business success. Automation methods are getting more and more polished and efficient, with automation software becoming a necessity rather than a luxury.

Of course, it’s still far from being perfect. Siri doesn’t always know the answer, Alexa occasionally mishears us and we all saw what a failure Microsoft’s Tay turned out to be.

Despite all the shortfalls, AI and automation are more versatile today than ever before, with a bunch of exciting business process automation trends knocking on our doors:

Most businesses today use API’s to integrate third-party apps and services. In reality, however, API’s prove to be expensive and hard to on-board. They also leave little space for team collaboration. An API-driven business instead of increasing its efficiency sooner or later finds itself trapped in the necessity of purchasing integrations over and over again. No-code automation, on the other hand, allows users to automate processes and increase productivity with minimal IT involvement.

End-to-end workflow delivers a full data lifecycle while supplying all the necessary components along the way. In simple words, it means that your entire team collaborates on workflows within a single workspace. No more budgeting for multiple service vendors or integrations between them! The end-to-end approach gives you the ability to build even the most complex business processes without having to integrate multiple products.

Human/staff augmentation is a business strategy that consists of evaluating the existing employees and determining what additional skills they require. Augmentation’s most significant advantage is that it leverages existing resources and utilizes an outsourced workforce. Today, the need to quickly and flexibly address workflow issues and bottlenecks is as relevant as ever before. Staff augmentation can help companies manage most of the tasks with their regular internal teams and with minimal assistance from IT. This and other trends are especially visible as more and more robust no-code solutions appear on the market.

No matter how automated your business processes are, they’re still reliant on the unique architecture of your business. And thus require human supervision. That’s why we’re pretty confident that the future of work will still involve humans in one way or another — with the focus shifting toward what technology can do WITH humans rather than WITHOUT them.

Don’t let the robots substitute you

Get the most out of automation trends

What can we learn from the history of automation? 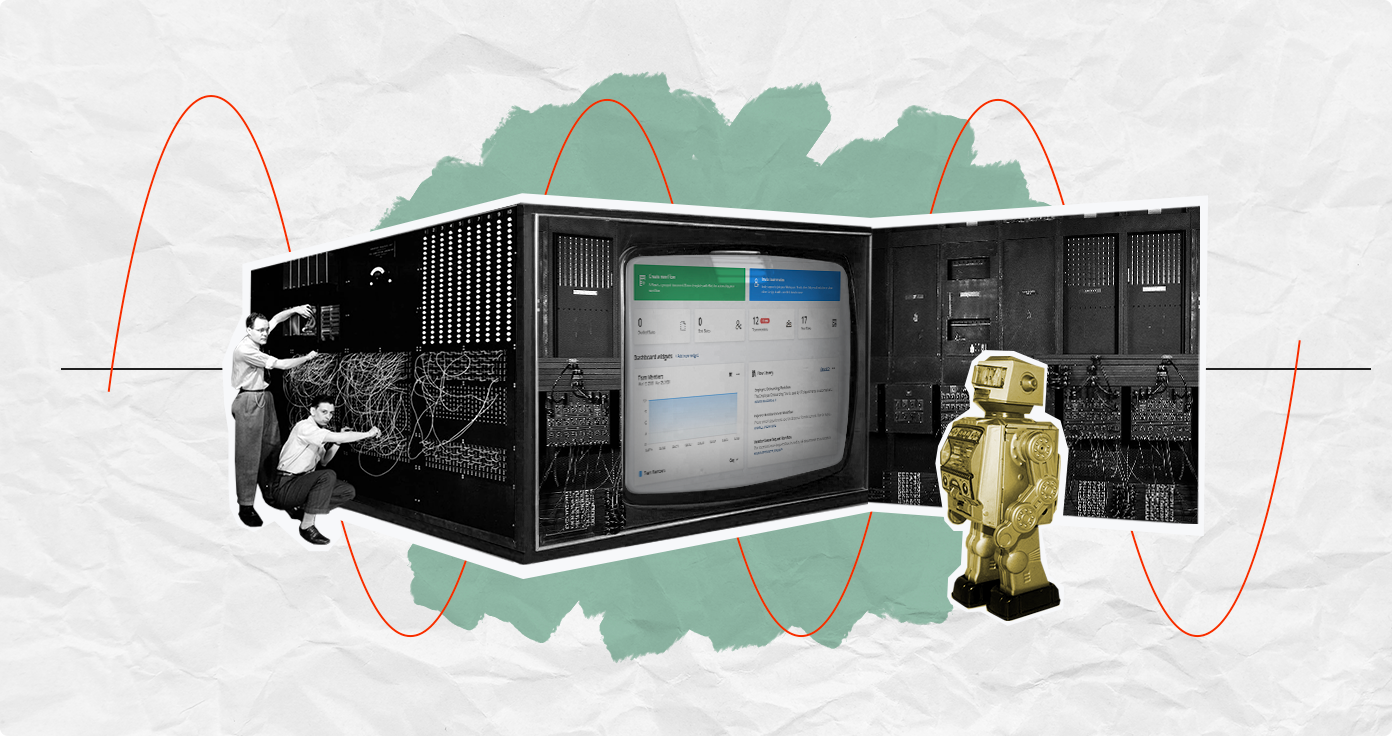 The history of automation, despite a few bumps along the way, is a history of success. It continues to evolve, providing us with more innovative AI solutions. Technology has finally reached the point where it’s simply cheaper, faster, and more reliable to have mundane tasks completed via automation.

But how can you get the most out of automation?

First of all – we have to learn

Humans have always been a part of automation history. However, we have gone from ‘creator’ to an inseparable part of automation. And today, without knowing how to navigate automation, we still don’t know how to get the most out of it.

A valuable piece of advice is not to focus solely on the developments in your own industry, of course learn about them but broaden your horizon and investigate more. Modern-day RPA and AI technologies are deeply connected with each other. Without knowing how to apply them, your business will struggle in 2020 and beyond.

By learning automation you will understand how to apply the right process automation strategy to your company’s workflows, calculate ROI, and how to deploy solutions inside your organization.

The airSlate Academy teaches students everything they need to know about the future of work trends and the emerging industry of digital transformation, and gives them a real chance to become a pioneer in workflow automation. Moreover, by acquiring skills in new technologies, you get a unique opportunity to make yourself future-proof, enhance your career and business development.

That’s actually why we wrote this article. Learning the history of automation is a vital part of learning modern automation trends.

It’s important to know how to choose

Many inventions through the history of automation failed, and many more have yet to prove themselves.

Today we have plenty of platforms and tools that streamline our daily operations as well as enhance and develop our business processes. The main point is that there are plenty of them and that they’re pretty expensive so it becomes really hard to choose the right tools.

So what should you consider when choosing a business automation solution?

Consider these four key points before investing in workflow vendors if you’re planning to automate in the future:

The points above tell us that what we need is flexibility. We’ve already mentioned the two main automation trends: no-code automation and end-to-end workflows. These trends usually come together.

An end-to-end workflow is a process that delivers a full document and data lifecycle while supplying all the necessary components along the way.

However, like we mentioned before, integrations are almost unavoidable and can be expensive when attempting to automate your workflow using any of the most common workflow solutions today. For example, Nintex positions themselves as a ‘Workflow automation platform,’ yet it’s Adobe Sign that powers e-signatures for Nintex customers. Others such as DocuSign will provide you with e-signatures and CRM integrations, but they don’t have any automation options except for simple things like sending reminders.

A lack of flexibility is where you find the biggest weakness in major workflow providers. Any time your workflow needs a new feature, you’ll have to pay for integrations from a third-party vendor.

That’s why, when you really look under the hood, end-to-end workflow automation is extremely expensive, if not impossible. By investing your time and money into such a solution, you just distance yourself from what your business really needs: an adjustable and transparent document and data workflow at a reasonable price.

With business automation platforms like airSlate, it’s the user who adjusts everything, no engineering support required. In this case end-to-end workflows feature:

Get all the tools you need to complete and automate your workflow without paying extra for third-party solutions and API-integrations.

Finding the perfect automation tool for your business won’t change your behavior or processes, it’ll enhance them. And that’s the whole point the history of automation leads us to. Automation is not something to be scared of, it’s something that you create and use to empower yourself and your business.

Three things we now know for sure:

As exciting as current and future tech is, we shouldn’t forget the history of automation or the work that it has taken to get us where we are today. After all, the way things are going, our today will become our past in the blink of an eye.

Ready to see airSlate in action?

Book a demo and learn how to set up automation for your entire document workflows using an all-in-one, no-code platform.